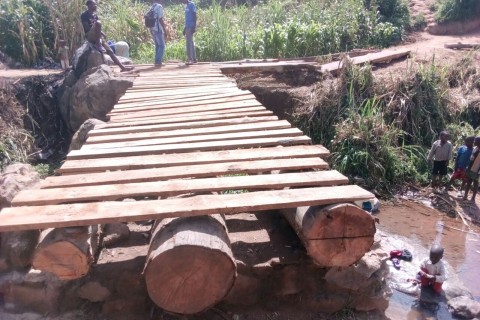 Residents of Masasa ward in Mzuzu city have commended their Councilor for his initiative to construct a new foot-pass bridge at Chideso in the area.

The new bridge has been constructed in response to requests from citizens to their councilor made through the Mzinda web platform on the need to construct a bridge between Manotha and Chideso areas so as to ensure convenience and safety for people as they travel across the two areas.

One of the specific reports that was sent on the 19th of November, 2016 by a Martin Wallace read: “Here in Masasa ward one of our concerns is the dilapidated bridge at Chideso. We request construction of a new bridge before the rains start”

Councilor for the ward, Yona Mkandawire said he had taken note of the reports and was equally concerned that is why he took the initiative to construct it with urgency. Mkandawire also highlighted that among other projects currently being implemented in his area is the construction of a road in Kanthete.

One of the citizens from the area, Mary Hango commended their councilor for being responsive to their reports and also appreciated the impact that the Mzinda platform is having in enabling citizens reach out with reports to their councilors and utility service providers.

Citizens are able to send a report on the status of service delivery in their area for the attention of their councilors, city councils and or utility service providers through SMS on +265 888 242 063 or by signing up on the Mzinda web platform at www.mzinda.com.